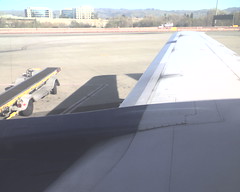 Friday, January 5th was pretty much unpacking and settling in at our hotel room. We were greeted by my wife's cousin, Sandy "Red Peach" at the San Jose International Airport and took a rental car to our hotel. Later that evening, we had gone to the Mills in Milpitas where my wife did some shopping After hitting all 6 neighborhoods, we decided to call it the evening and pretty much hit the hay.

Saturday, January 6th was jammed packed of events. Late morning, we had breakfast at Denny's on N. 1st Street, in front of a blazing fireplace. A little too romantic for breakfast. We then visited the Children's Discovery Museum in San Jose. The wife and I love hitting the museums that offer interactivies. Working some of the puzzles and creating dolls using nothing but the discarded corn husks, that killed about and hour of our time. As we left the museum, we saw the largest Monopoly game board in the country.

In the afternoon, we had a wedding reception/tea and snack party to attend. My wife cousin, Jean (Sandy's older sister) and Nelson had the wedding in Vegas earlier and had the reception later for those that could not attend the reception in Taiwan. In the evening, the nine of us (Jean, Nelson, Sandy, Nelson's mom, Nelson's brother's girlfriend, my wife, two other friends and I) had dinner at Liou's Chinese Restaurant in Milpitas, CA. Let's just say that something I ate didn't agree with me.

Sunday, January 7th, we made plans to have a DimSum luncheon with Sandy. Jean and Nelson had to work that day so they couldn't join us. The luncheon wasn't bad and would have been better if they had the "chicken feet" delicacy available when we requested it. There was a big demand and I guess the kitchen couldn't keep up.

After lunch, we headed to the largest flea market ij the state of California. Again, we did some shopping just to take it in the experience of the local. This lasted for about anf hour ad we went to "The Tech" museum in San Jose, CA. We only had only an hour to do the interactive stuff before we had to venture to the IMAX theatre featuring "Happy Feet". While the feature was entertaining to watch on the BIG viewing screen, the movie was not t featured on such a large screen, 'ouch, my neck.'

Monday, January 8th, time to pack and say our last goodbyes. We had lunch with Sandy while Jean and Nelson had to work. Oh, in case you're wondering, Sandy was also visiting and on break from her studies in Albany, NY. After lunch, we say goodbye and headed off to the airport. I'm currently over Denver while I'm typing this and will be in Denver airport when this post is transmitted. 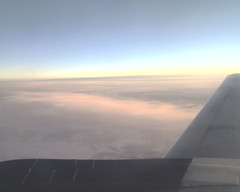 Over Colorado
Originally uploaded by johnhighway.
We should be starting our descent towards Denver airport.
Collapse