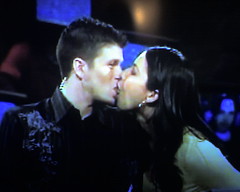 Kevin Pereira and Olivia Munn Romantically Involved
Originally uploaded by johnhighway.
There you have it folks, G4's Attack of the Show co-host Olivia Munn officially declares her valentine affection to G4's fellow co-host Kevin Pereira on the air live.

When Miss Munn was asked "Why now?" she replied, "Why not now?"

Kevin Pereira was not available for comment but his agent had this prepared statement, "The actions of two people should be considered between two people and not for the public."

With Valentine around the corner, Olivia's got her man.